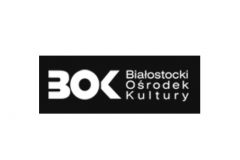 Bialystok Cultural Centre exists since 1975 (named the Municipal House of Culture then), for a long time it included several urban centers, cinema theater, cafes, club and outdoor facilities among others. In the early 90’s, similarly to other institutions, it was reorganized and changed its name to the present Bialystok Cultural Centre. Every year, Bialystok Cultural Centre as the municipal institution organizes or co-organizes about 300 events in which participates an average of over 80,000 people. The Centre offer is addressed to diverse audience, ranging from children through young people and adults, to seniors.