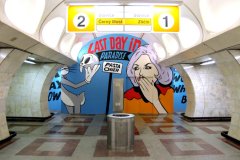 DPP (The Prague Public Transit Co. Inc.) is building features to make the Anděl metro station in Prague wheelchair accessible. The project began in late 2014, and is expected to continue through the rest of 2015. When DPP began the project, the walls were white. Soon, however, they were filled with graffiti which included "amorous messages and vulgar poems," according to Metro.cz. In an effort to make the station a little more appealing, DPP has asked local street artists to brighten things up. On a Friday night, they gave the walls a makeover. “The primary aim of DPP was to improve the look of the area around the construction site, which was damaged significantly by vandals,” spokesperson Jiří Štábl told to Metro.cz. “Commuters now have a chance to get a glimpse at works by leading artists not only in the Czech art scene.” This kind of graffiti is certainly an improvement. 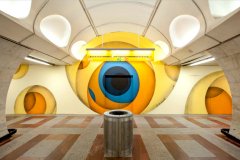