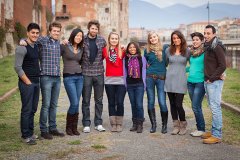 Piecing Together is a project led by Harlow Council that uses industrial and household waste to create large-scale community art works around the town.

The project aims to:

The project has evolved from the Art Underground initiative that ran in the town during the summer of 2001. It resulted in the transformation of a graffiti-ridden underpass in Harlow town centre into a mosaic heaven.

The council’s Cleansing and Environment Services were looking for ways to solve the persistent problem of racist and offensive graffiti in Harlow and this is how the project came about. The Rotary Club of Harlow wanted to sponsor a youth and environment project in the town. At the same time, Essex County Council’s Youth Offending Team (YOT) wanted suitable activities for youth offenders to take part in as part of its reparation programme.

Projects relating to improving the environment were suggested because it was thought this would encourage young people to respect the areas in which they were working, resulting in less incidents of offending from the youngsters involved.

As well as the main organisations mentioned Harlow Arts (the Arts service of Harlow Council) and the council’s Hare Street and Little Parndon Area Forum provided funding for the project. YOT and youth workers at Harlow’s foyer Occasio House, which is next to the underpass, recruited young people to take part.