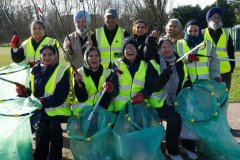 The aim of Operation Spring Clean was to clean up and improve local environmental quality (LEQ) on one of the most socially deprived and poor estates, in terms of LEQ, in the borough. Graffiti was particularly prevalent on this estate.
Partners involved in the project included parishes, cleansing contractors, the ‘graffiti busters’ team, police, fire service and the Driver and Vehicle Licensing Agency (DVLA). The project included a blitz on the whole area to remove rubbish as well as to specifically tackle graffiti. Cleansing staff were on site to talk to residents about the consequences of graffiti and other LEQ-related issues. The police maintained a high presence and the fire service visited schools and carried out fire demonstrations, as well as being available to talk to residents. A poster competition was run for 5 – 12 year olds. Children were asked to design posters to prevent graffiti and littering and the winners were exhibited in the local library.

After cleaning and protection, the buildings were attacked with graffiti as predicted, but they were easily cleaned again. Currently it has remained graffiti free for several months, the incidences of attacks reducing with time. The event received substantial media coverage in the local press and on the radio. Over 100 square metres of graffiti was removed in one week in addition to over 30 tonnes of rubbish/fly-tipping and 12 abandoned vehicles. The improvement in LEQ was huge and remained pristine for some weeks. Protected surfaces have had subsequent graffiti attacks easily removed by the local community and ‘taggers’ have ceased to target these surfaces. The week-long campaign was incredibly well received by the community and the local authority has received numerous letters and communications of thanks.