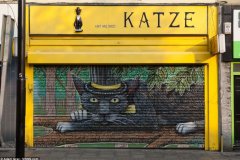 London borough of Sutton in its town centre had a problem of graffiti. Just painting over the graffiti did not stop it re-appearing and it was decided that painting a mural might be more effective. Initially just one shop shutter was painted as an experiment – this proved successful with the shop looking much better and the graffiti problem disappearing. Following this success the scheme was expanded and now many shutters, blank walls and empty shops are painted with murals. The shutters are painted on site and the murals for walls and empty shops are painted off site on eight feet x four feet sheets of plywood. These are fixed to the wall or shop and can be moved and placed elsewhere if needs change. The local community has now become involved in the project. A competition to design shutters was held with local school children, and local arts schools have been involved in the design and completion of the murals.