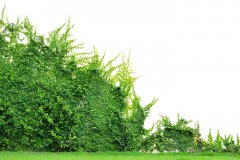 Target softening is a prevention method that involves resistance against tagging designed in parallel to give something positive back to the environment, with well‐planned maintainance. This response action works in different ways, such as planting grass and trees in the area which works as a barrier or covering walls with climbing plants so that the writer have no longer access to the surface. In Netherlands, The Hague Local Agenda 21, “green against graffiti” idea has been successfully implemented by covering walls with climbing plants to combat unwanted graffiti. Greening helps adding beauty to a place while making it inaccessible to graffiti writers. Moreover, Kuo & Sullivan (2001) have suggested that there is a relationship between minor crimes such as graffiti vandalism and a lack of vegetation. A survey of 31 urban sites in a California community found that 90% of the incidents of vandalism or graffiti occurred in areas without plantings compared to 10% in landscaped areas.