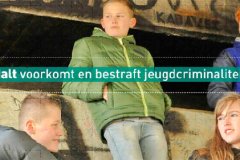 HALT project in the Netherlands focuses on dealing with those aged between 12 and 18 years who come in contact with the police for the first or second time. It is intended primarily for offences such as vandalism, graffiti, shoplifting and illegal use of fireworks. Juveniles, who have been apprehended by the police, have a choice between the criminal justice system and the Halt program. If they decide to take the Halt program they can right their wrongs whilst avoiding contact with criminal justice authorities. The program arranges punishments that can include repair of the damage or removal of the graffiti.
In the Netherlands, the age of criminal responsibility begins at 12 years. Only the police can refer a young person to HALT. Most are first time offenders engaged in shoplifting (25%) criminal damage (20%), illegal use of fireworks (20%) and other crimes against property (15%). Those referred for incidents involving graffiti were said to have increased over recent months. When referred to HALT, the young person between 12 and 18 years must comply with the arrangements or be prosecuted for the offence. HALT provides an immediate response to the incident and confronts the young person with the consequences of their behaviour and makes them responsible for it. The sanctions are felt directly and immediately by the young person through time and labour and a fine for cost of the incident. But the young person does not acquire a criminal record. The basic principle of HALT is to change the young person's behaviour and stop them from offending in the future.
HALT began in Rotterdam in 1981, primarily to tackle vandalism. HALT has now widened its objectives from the prevention of vandalism to other areas of criminal and anti-social behaviour committed by young people. The success in Rotterdam encouraged the development of HALT Bureau in other cities and towns. HALT has contributed to an evolution of the system, from punishment and detention towards a combination of work-related tasks and educational programmes for crime prevention; It has contributed to a partnership approach to juvenile offending, involving the victims, parents, police, school and the wider community; The intervention, including referral, interviews, work placement and educational sessions, to closing of the case, normally take about two or three months. This is two or three times faster and more efficient than any other intervention; and HALT relieves pressure on the local juvenile penal system.