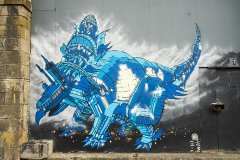 The Graffiti Forum was established in 2000, in response to a marked rise in various forms of graffiti. Membership of the forum now includes representatives from the councils, neighbourhood services and regeneration directorates, Northumbria Police, Nexus and other major transport operators such as Stagecoach, Telewest, Network Rail, Northumbria Probation Service, and Northumbria University.
Taking a wide view of the issues behind the problems and using a range of solutions has always been the thinking behind the group. In the first 18 months, work focused on the traditional practices of enforcement, removal, education and prevention. It quickly became clear that this was not enough and an understanding of the root causes was required.
Forum members commissioned Northumbria University to ‘explore solutions to graffiti in Newcastle upon Tyne’, which became the title of the report, resulting from seven months of in-depth research across the UK and Europe. Locally, the research team consulted over 40 local graffiti writers, 24 local Graffiti Forum members and local workers, and around 200 members of the public.
As a community survey, Participatory Appraisal (PA) is used which is a community-based approach to consultation that prioritises the views of local people, and their involvement and action in deciding what happens in their community. PA uses visual and flexible tools such as maps, spider diagrams and charts to ensure that everyone can participate, regardless of their background.
200 graffiti removal packs have been made available, free of charge, to loan by the public and 26 ‘Rapid Response’ operatives are on call to remove small quantities from various property and surface types at very short notice.
The cabinet agreed to a limited trial of an outdoor site, in conjunction with the development of a city skatepark. Work continues to identify and establish more permanent sites with the right profile for the writers, local residents and the authorities to agree upon, and further interest has developed in intergenerational projects. One of the park’s user groups is particularly keen to develop painted areas within the park as a way of brightening the place up and demonstrating an inclusive approach to managing the site.
Although reported levels of graffiti seem not to drop significantly, this was due to increased reporting of incidents and intelligence from the front line services and service users. Through the development of increased performance measures and response times, more graffiti is removed and done so quicker, as the Council has increased teams from two to five and removed 64,000m2 of graffiti last year. The council’s response to racist and obscene graffiti is usually well within the two day local target – often within hours.