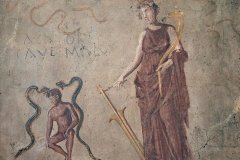 The ancient Roman city of Pompeii is famous for its art, architecture and even its graffiti. But a new study on scatological graffiti reveals that Pompeians were quite concerned with that thing that everyone does — poop. Kristina Killgrove reports for Forbes. Almost all of the graffiti on Pompeian walls were located in very public places (e.g. in front of rooms of shops and taverns) and almost two dozen refer to human waste, using some form of the Latin word cacare, which can be translated as the vulgar “to sh*t”. One person wrote: “We peed in the bed, I confess; we have erred, inkeeper. If you ask why, there was no chamber pot.” Clearly, before the advent of Yelp, the Romans had to express their annoyance at poor hotel conditions somehow! While today there is Twitter to express these opinions, the Romans had to use graffiti. “Two-thousand-year-old scatological graffiti show that ancient Pompeians faced some of the same problems that we face today,” Levin-Richardson, University of Washington classics professor, tells the paper. “There weren’t enough public toilets for fans coming to see gladiatorial matches in Pompeii’s amphitheater, so fans apparently did their business behind neighboring houses. And the graffiti are relevant to today’s political climate, in which the bodies of the candidates — their exercise and health routines, their genders and gestures — are under constant scrutiny.” As the Romans might say, quoting Ovid’s Metamorphoses, omnia mutantur nihil interit: everything changes, nothing perishes. Graffiti really aren’t much different now than they were 2,000 years ago. Find out more here.