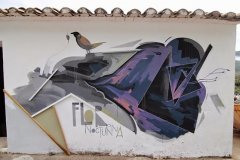 The village of Fanzara, home to 323 people, counts two bars, one butcher and a shop. But over the past year, this small village 50 miles north of Valencia has quietly transformed itself into the street art capital of Spain, with more than 40 murals by some of the country’s top street artists tucked among its beige and grey walls. Javier López, one of those behind the citizen-led transformation, said: “We’ve converted the village into a huge open-air gallery. We thought that putting together a museum like this would be impossible – but we’re doing it.” A lifelong fan of art, López, 48, launched MIAU, the Unfinished Museum of Urban Art, with his friend Rafa Gascó, 50, last summer. He said: “We wanted to build a museum where anyone who wanted to create art in our village could come and do it.” There’s just one condition: the artists must involve the residents of Fanzara in the creative process in some way. Suggested examples include workshops or talking through ideas with residents.

The project’s first challenge was winning the backing of the villagers – many of whom are in their 70s and 80s – and convincing them of the merits of handing over wall space to visiting street artists. “It was tough to make people understand what we wanted to do – most older people don’t know much about street art,” he said. “Eventually they told us, even though we don’t like it, you can go ahead.” "Their trust was surprising, given that nobody was quite sure what would come out of the project" stated López. The project began timidly, inviting 15 of Spain’s leading street artists to spend four days in the village last September and paint one mural in exchange for room and board. He said: “When people came, they slept at our house. The food, we cooked it ourselves. It was that kind of budget event.”

The artists were shown where they could paint, but no limits were put on the content of their art. Instead organisers took a leap of faith, simply asking them to keep in mind the people who would see the art everyday. “It’s a small village, made up mostly of senior citizens,” López added. As the weekend got underway, the residents of the village became more interested, with many of them excitedly flagging down the artists and asking them to paint murals on the facade of their houses. The number of works in the village soon swelled to 44. For many in Fanzara, the project was a crash course in street art, something that they had never seen before. López said: “It’s amazing to see a street artist painting a mural while a group of grandparents stand around, asking him questions about what he’s painting and why.”

The museum came into existence just as villagers were emerging from a bitter debate over a proposal to build a toxic waste incinerator in the village, said the mayor, Roberto Salisa Castillo. The proposal divided Fanzara, with some arguing that it was a necessity in order for it to buck the trend of Spain’s dying villages. After the proposal was defeated, the museum was a low-risk way to help foster peace in the village. He said: “If it didn’t work out we figured we could just paint over the murals with white paint.” However, he added, its unexpected success has put Fanzara on the map, attracting the curiosity of neighbouring universities while a growing number of people stop by to see the murals. Best of all, the residents – who were initially wary of the idea – have embraced it, said Salisa Castillo. “Neighbours who didn’t know anything about street art now will tell you all about graffiti.” Those behind the museum say this is just the beginning. The project, which includes a monthly roster of events, has been expanded to include other art forms, be they theatre, performance art or music, while the village is gearing up to host another group of street artists in July. With enthusiasm for the project far outstripping wall space, murals will be painted over regularly, said López, once residents deem that the artwork has run its course. He added: “That’s why it’s called the unfinished museum, because its always going to be in constant evolution. It’s a museum that echoes the story of our village.” 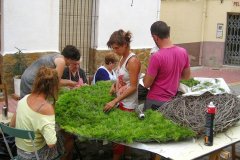 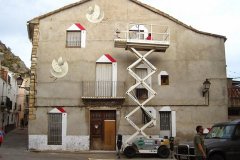