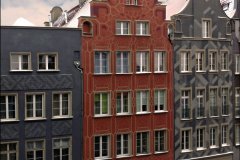 OGARNA 2.0 project is a complex and multilayered revitalisation of Ogarna Street.

The main goals of the project are: renovation of chosen elevation parts and decorating them with artistic arrangements; building greens and elements of small architecture; organising and coordinating events and actions that will integrate inhabitants of Ogarna Street into the process of revitalisation and earn their support for the project.

Ogarna Street is one of the main and longest streets of the Gdansk Old Town, it also plays a crucial role as regards city transport. Before the Second World War, Ogarna Street was a thriving and lively place inhabited mostly by merchants and craftsmen. Together with the Long Lane (Długa) and the Long Market (Długi Targ), it was one of the three direct routes to Granary Island (Wyspa Spichrzów) through the Cow Gate (Krowia Barama) and a drawbridge over Motlawa River. The Second World War brought about destruction of most parts of Gdansk, including Ogarna Street. Despite many renovations, Ogarna’s pre-war charm and atmosphere could not be recovered.