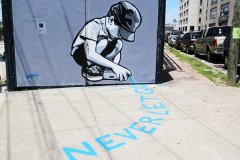 First programme targets sixteen year olds and is about the consequences of violence against train staff. Nearly two-thirds of violent incidents towards staff involve people not travelling with a ticket or travelling without a valid ticket and some of these incidents involve those engaged in vandalism and graffiti. A ticket inspector who was severely assaulted has developed the programme. It includes a particularly effective and moving video that explores, in a story-format, the consequences of a severe assault for a man, his family and the perpetrator.
A second programme is delivered by train drivers and is targeted at trackside incidents of trespass and vandalism. It includes a professionally produced video. This adopts a story-format to reveal how the activities of a group of young people playing by the track can escalate from play to vandalism by laying stones and other obstacles on the track. A young boy with the group then runs for his ball in the path of a fast-moving train and it is certain that he has been killed. Although he managed to jump clear, this is not known for some time. The focus is on the driver and the guard and the other young people expecting to find the body under the train. The video also shows other examples of dangerous behaviour, including: young adults sitting on the platform dangling their legs over the track, and a cyclist ignoring the red light to travel across a crossing with a train approaching.