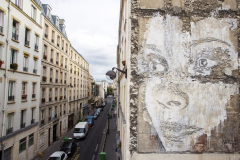 We last saw Portuguese artist Vhils aka Alexandre Farto on the streets of London back in the summer of 2014 when the artists created the above piece in the Bethnal Green Nature Reserve for the Phytology* Project (covered here). Later this week sees the artist return of to Lazarides Gallery in London to present a new body of multidisciplinary work featuring figurative compositions comprised of wood, billboard, metal and Styrofoam dioramas.

Alexandre Farto has been interacting visually with the urban environment under the name of Vhils since his days as a prolific graffiti writer in the early 2000s. For this his first London show since 2012,  Dissonance will showcase the ultimate culmination of his ideas initiated and developed in his last two solo exhibitions in 2014: Dissection, held at Lisbon's EDP Museum and Vestiges, showcased in Paris. 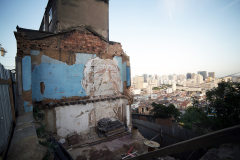